In this third article in what is rapidly becoming a series on binary trees, we’ll have a look at another way of constructing generic binary trees from a serialised format. For this, we’ll build on some of the techniques and insights from the previous articles:

In the first article we covered how a generic (unordered) binary tree cannot be constructed from a single depth-first search sequentialisation. Lacking structural information, a second sequentialisation is required, in-order with one or pre or post-order. This is all well and good when the values in the tree are small (measured in bytes), but as they get larger, there is a considerable overhead in this duplication of values. Compression will certainly help, but is unlikely to remove it entirely.

The second article introduced the notion of attachment loci of a tree under construction: the possible locations where the next node/value from a pre-order sequence could be placed. We only needed them for constructing tree permutations at the time, but with a few tweaks, we should be able to use them to provide the structural information to supplement the single sequentialisation.

Let’s start with that last idea. We take the basic recursive depth-first search algorithm and extend the return value to include the attachment point of the node value returned. We’ll assign the furthest-right locus 0 and number up from there. This means adding a 1 for every time we recurse and explore a left branch.

The generator below yields tuples with an absolute branch location and the value at that location, in pre-order sequence:

While this does a little bit more work than the typical depth-first search algorithm, it shares its time and memory complexities of linear and height-dependent respectively. 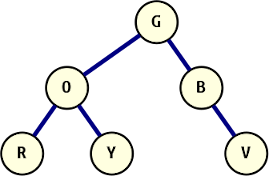 A binary tree with text values.

This binary tree is sorted, but that only becomes obvious once you learn that the letters refer to the colors of the rainbow, at which point its chromatic ordering becomes clear. 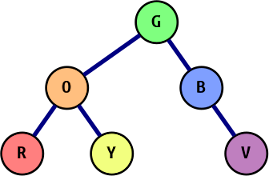 The same tree as above, now colored to illustrate the chromatic ordering.

Counting from the left?

You might be tempted to reverse the numbering, making the left-most attachment locus 0 and numbering up to the right (or more generally, towards the root of the tree). Unfortunately this cannot work in this recursive algorithm. Keeping the left-most attachment locus at zero would require that the recursion on the left branch does not increase the branch_id. This would also mean that the a there is no difference in branch_id of a third node that is the right child of the root’s left node, or the root’s immediate right child in that same tree. This ambiguity removes any value the branch could provide.

The algorithm as shown above doesn’t suffer from any ‘shadowing’ problem like this because there are no further recursions following the exploration of the right branch. This probably also affects algorithms with more than 2 steps of recursion in a single body, it would need more values (in number or through other dimensions) to track the state of the various recursion levels. At a guess, equal to the number of recursive calls, minus one if the algorithm allows for it.

While the output from the previous function is enough to rebuild the original tree, it doesn’t quite focus on the ease of reconstruction, or the brevity of the communication, which is one of the reasons we started this.

So, before we send this sequentialisation over the wire, there are a number of small tweaks we’ll make:

The inner function takes the iterator returned by dfs_structural and turns it into a relative one by tracking the difference between the current and last branch_id, turning the absolute values into just the changes. Instead of returning tuples it returns the delta and node value in sequence.

The final statement reads a bit terse, but it returns the absolute-to-relative conversion of the traversal, skipping the first value from the resulting iterator. When captured into a list, our tree from before is now represented as ["G", 0, "O", 0, "R", 2, "Y", 2, "B", 1, "V"].

Constructing a tree from this stream is pretty straightforward, the only “trick” we need is a pairwise iterator, which is easily achieved by taking a single iterator from the pre-order sequence and zipping it on itself:

Like our previous iterative functions that operate on or create a tree, we maintain a small stack to account for backtracking. If the relative position is 0 we attach it on the left. In other cases we backtrack 0 or more steps (note that range(1, 1) is an empty range) and then attach on the right. Once all values have been processed, the construction is done and the root is returned.

The series of trees below provide a visualisation of the construction process. Each graph shows the tree at the start of a loop iteration, before inserting the next node. Each possible attachment locus is indicated with a number, according to the relative branch numbering scheme. 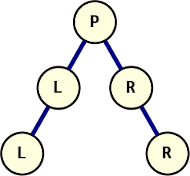 A tree with non-distinct elements, created from its uniquely identifying sequence

One of the goals we set out with was to have a minimal serialised size for something like a JSON transport of a tree. Given some smaller trees consisting of 8-character words, the space savings amount to roughly 40%, though this depends greatly on the length of the values. Worst case we achieve parity (minus a handful of bytes).

What about compression though, how much will that affect the results? A little bit but not a whole lot. Serialising a 1000-node, mostly balanced, tree, where each node contains an 8-character word as its value, the following results are achieved:

Another significant benefit over the dual-sequence method of construction is that with this method, the tree is not restricted to distinct values. Because the structural information is encoded in the sequence and provides complete information for node placement, repeated values do not create ambiguity in the reconstructed tree. The graph on the right shows the tree constructed from ["P", 0, "L", 0, "L", 3, "R", 1, "R"]. Attempting to construct this tree from in-order and pre-order sequences would have four equally possible outcomes without a way to determine the correct one. The algorithm from the first post would place the second L on the right of the first, for example.