A few days ago I ended up on a website (I forget where) which featured a very nice and subtle square tiling on the background of the page. Now, this is in itself is not astonishing, plenty of folks and businesses out there will present you with all sorts of tessellated backgrounds. However, it got me thinking about doing some tiling background myself. Not because I particularly need one (it certainly wouldn’t look right on this blog), but just to experiment. To make things slightly more interesting I opted for another shape: the hexagon.

A hexagon is a polygon with six edges and six vertices. The regular hexagon is equilateral and all internal angles are 120°. It is also one of three polygons with which you can create a regular tiling. That is, using only hexagons you can fill a plane without any gaps or overlaps. The other two regular shapes with which this can be done are the square and the equilateral triangle.

Drawing a hexagon with PIL

The hexagon drawn with PIL.

Because of the lack of anti-aliasing, the slanted lines of the hexagon look very messy. A close-up of one of the vertices shows this in more detail.

What this does, step by step:

However, as shown, the resulting image is not very visually appealing. The slanted edges of the hexagon are not smoothed, anti-aliased, and drawing multiple hexagons will cause gaps and overlaps because our hexagons are not on exact pixel boundaries. This is problematic and needs a solution. Thankfully, one exists.

Drawing a hexagon with aggdraw

Aggdraw is an extension to PIL based on the Anti-Grain Geometry library which provides anti-aliasing and alpha compositing. After installing aggdraw [1] and making a few minor adjustments to the script, the resulting hexagon is perfectly smooth along the edges:

The same hexagon as before, drawn with PIL+aggdraw.

The slanted edges now look smooth and straight, and the 5x magnification shows the anti-aliasing that has been performed.

Now that we can draw a single aesthetically pleasing hexagon, the next step is to fill a grid with them. There are multiple ways of achieving this, one of them is adding some functionality to the hexagon generator where instead of providing it with a pixel offset, we provide it with the row and column we want the hexagon for:

A row has hexagons all at the exact same height, and every odd-numbered row is shifted one hexagon-width to the right. This makes our rows very sparsely filled, and rows are only half a hexagon tall. While this might seem undesirable because it makes a [3 colum] x [3 row] configuration 3.4 times wider than tall, it makes things a lot easier when we get to the point of preparing the edges of the image for tiled use. 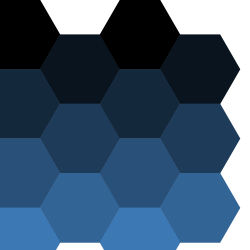 The resulting array of hexagons.

To put more than a handful hexagons on screen, we need a slightly bigger canvas, in this case 250px squared. We initiate the class HexagonGenerator with the edge size of our hexagons, and then iterate through seven rows and of each two hexagons. We draw these using the instantiated hexagon generator, similarly to how we previously used the hexagon_generator() function.

To be able to see the individual hexagons, each rows is drawn in an increasingly lighter shade of blue. The result of this code is included to the side.

After this short session we can now fill a canvas with a neatly arranged grid of hexagons. Both the image and the hexagons themselves can be of any size, and because of anti-aliasing provided by aggdraw, there are no grainy edges to be seen anywhere.

However, a number of things are still to be improved:

These issues will be resolved and explained in the next post.